The story of my violin

When I was still at Juilliard, I played on an Eugidius Klotz(German violin) which friends of my parents had lent me until such time as I could buy my own violin. In my second year(1982) I started thinking that perhaps I should try out different instruments so that I could begin to develop a sense of what kind of sound and feel I would want if I were to choose my own violin one day. I had no extra money so buying was not yet an option. Also, never having had the chance to choose my own instrument before(I was always just grateful for what I was given), I never really developed any preference.

So one cold, sunny morning in NY City, I crossed 62nd street to David Segal's violin shop which was right opposite the building where I was living. I asked him if he had any instruments for sale that I could try out. He had a violin in his hands which he held out to me saying "Try this one". I started to play on it - it sounded great, but since that was the first one I tried, I thought of it as being merely a good start to a long process...

While I was playing, the shop's doorbell rang and who would enter but the concertmaster of the NY Philharmonic. He asked me to continue playing but immediately took an interest in the violin. He loved the sound. David asked him what make he thought the violin could be, judging by the sound. He promptly said that it sounded like a Guarneri. My heart sank - the last thing I wanted was to get a taste of the very best merely to have to settle for something much less satisfying because of the financial implications!

David then told us that the violin was a complete enigma - it had no name inside and therefore it was for sale at an extremely low price, namely $4 500. My jaw dropped. I couldn't believe what I was hearing! One of my violinist friends was just in the process of trying out a violin 'with a name' for $60 000 and this one sounded as good if not better! Having heard it, the famous concertmaster wanted to buy the fiddle there and then. You can imagine what thoughts were going through my mind. David then said "Well, Zanta was here five minutes before you, so she has the first option on the instrument."  My heart and thoughts were racing: I didn't have any money and never thought I would seriously be considering buying an instrument that day. But this was such an unusual and special situation that I had to take it seriously and without any further hesitation I said that I would like to have it for one day.

Upon leaving the shop, I literally ran to Miss Delay's studio at Juilliard, which was just two blocks away. I hardly knocked, stormed in while she was busy teaching and started to tell her about the violin and what had just happened at David Segal's shop.

She immediately saw the significance of the moment and then did something that I will never forget. She asked the student whose lesson I had interrupted as well as three other students who were waiting outside her studio, to come with us to Alice Tully Hall. There she and I sat in the hall and she had them play on each of their instruments and on this wonderful, nameless violin that I took for the day. 'My' violin stood out above the rest. She turned to me and said that she was convinced that I should buy this violin, even if I had to borrow the money as it was a most rare and significant find: an instrument with such a sound at such a low price.

I went back to my apartment and called my father in South Africa. I told him the whole story and then asked if he new of someone who might be willing to lend me the money. My dad was a missionary at the time and had limited financial resources but a lot of faith and hope. Like miss Delay, he also sensed the importance and urgency of the situation and so he promised to do what he could to help me. The next morning I received a call from him with the good news that a friend of ours had offered to lend me the money on condition that I pay it back as soon as I started to earn money after college.

I was overjoyed. I ran(again) across 62nd street to David Segal 's shop and finalised the deal. There I was, one day later with my very own instrument with no name and a wonderful sound! The new violin had a  bigger body than the Klotz and within a month I started to get tendonitis from having to adjust to the bigger size. That soon went away and I have been happy with my violin to this day. Every time I meet a luthier, I ask whether he or she might know who the maker might have been. So far, nobody knows and everybody agrees that it is a fairly new instrument and definitely a copy of a Guarneri (it has a phenomenal G-string sound).

In August of this year I was in Genoa, Italy where I met Alberto Giordano, luthier and co-curator of the 'Cannon'  that Paganini played on. His first reaction was that it is a copy of the 'Cannon'. I was so surprised - he would know since he uses the 'Cannon' as the model for his own violins!

My violin has become my personal voice in my music making. I remain in awe of the events that took place during those two days in New York. I will always be indebted to everyone who played a part in making the dream of having my own beautiful instrument, come true. Life is wonderful!

<< back to all articles 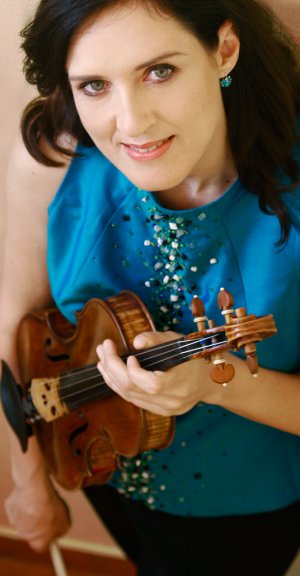